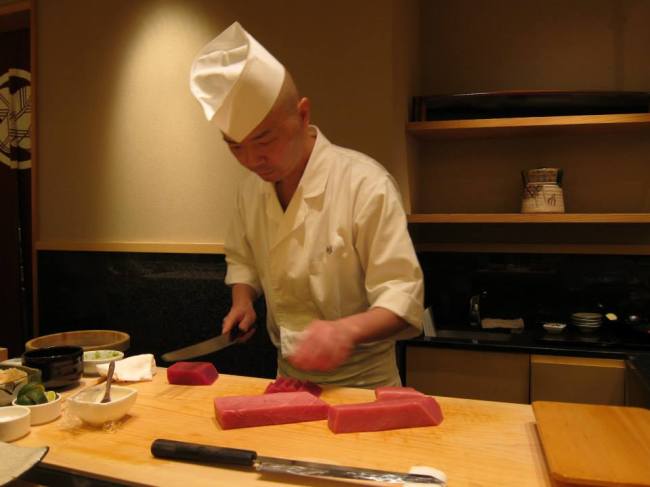 It is official: I have finally found a good Japanese restaurant that does fine dining in Singapore. Shinji restaurant is opened by the 2 michelin star chef from Tokyo, Shinji Kanesaka. Came across this restaurant in Asia’s best 50 restaurant and I know I must try it as I am quite desperate to discover a good fine dining Japanese restaurant after not being able to find one for so long. One that is comparable to the one michelin Jap restaurant in London, Umu and Netherlands, Yamazato. Finally, there indeed is one out there in Singapore, Shinji! Know that there’s waku ghin but thought that is really out of my budget till I earn enough.

The chef who served us today is Oshino Koichiro and he was previously from Yamazato. Was really a coincidence that I’ve been to that restaurant before! And now for some serious sushi pictures. 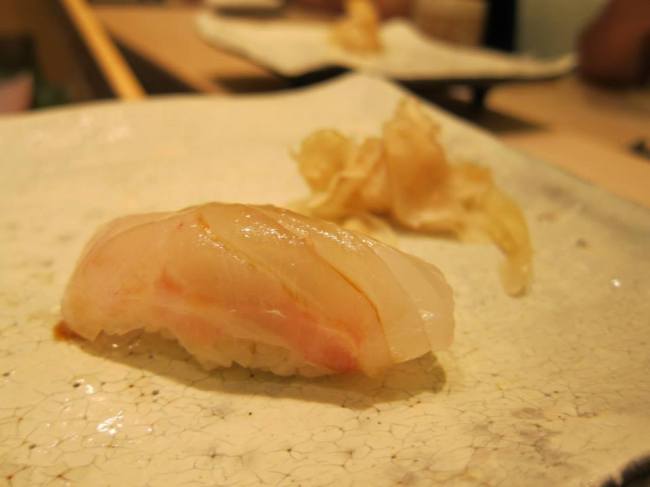 Red snapper! I was taken a little surprise by this first sushi as the rice was warm. Very special I thought and needless to say, every grain of rice was well and uniformly flavoured. Snapper was smooth, and definitely fresh, as could be seen from the big slabs of fish in the previous photo.

Squid sushi. I am not a fan of ika as I usually cannot chew the squid into bits when I have it in other chains. But this one wasn’t the case at all, really don’t know how he did it but the squid is of the right texture. A little chewy but breaks off easily when you bite it. He also squeezed a little bit of lime juice on it to make it taste even fresher. 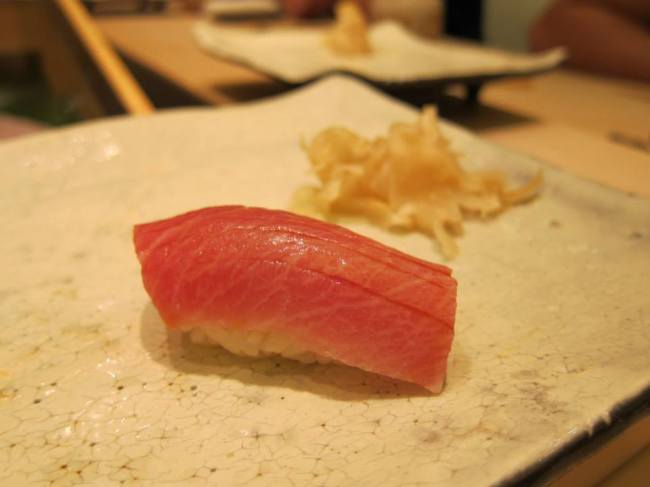 Tuna that tasted like wagyu according to the chef. It’s in between the fattest and less fat part. Indeed, it looks like it but as I have not had raw wagyu I don’t know if they taste similar. Nevertheless, a pretty sushi!

Zuke marinated tuna. The chef prepared this by putting the sliced tuna in a bowl and then marinates it with soya sauce (I guess). Texture is quite different from the chuttoro, a little softer and more slithery I thought which still goes well for me! 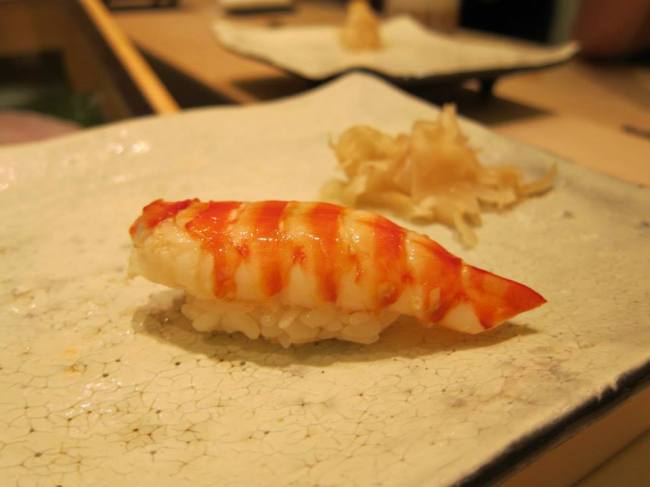 Prawn sushi. Has shrimp powder under it and makes it so fragrant. Quite a different piece of prawn sushi as its colours are really bright and enticing. It’s really not just boiled prawn with mirin rice. There’re a lot of fine details to it like the shrimp powder, wasabi, slightly flavoured prawn and of course the tasty rice. 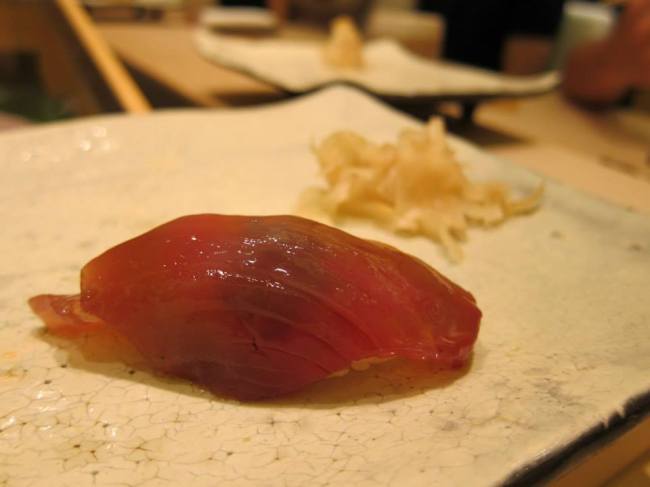 Onito sushi. This sushi tasted a little different as there’s a little herbs under it. Fragrant in a different way, as if spring is back.

Negitoro. Negi means chopped. This nori sushi is so different. Nori, according to my friend, was fanned by the chef inside (according to Japan hour) and I really think so as it is crispy! It’s the first time I have gunkan with crispy nori wrapped around it. You usually only have it crispy if it’s on temaki. The topping is really fragrant, very good mix of spices and ingredients that goes so well with the chopped fish.

Really good clear soup. It is like what its name says, clear! Very refreshing and tasty, full of fresh ingredients taste. The meatball was springy, very tasty and fragrant too. Love it to bits.

And then we had the Anaho. Grilled eel. It was still piping hot when it was laid on the chef board. Really fragrant and fresh. 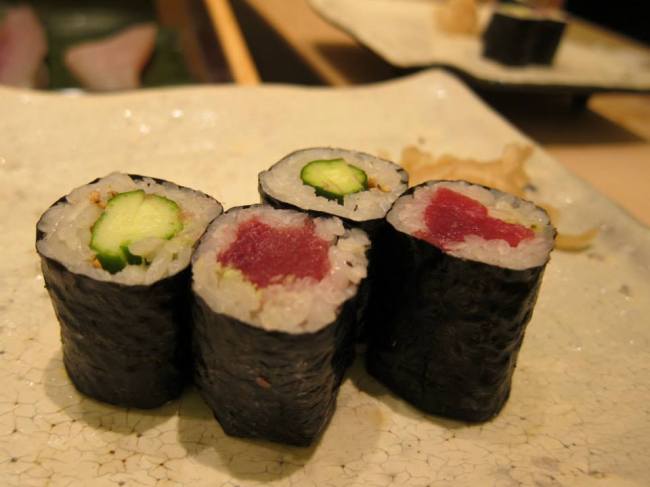 The maki were commendable too! Though it’s a simple snack, the cucumber maki will really surprise you. Very crunchy and fresh, as if it has just been harvested from a farm. Never had such good cucumber sushi before.

Really cute tamago. Looks like custard and tasted good. Not overly sweet like some other places and is really smooth. Doesn’t feel hollow too unlike most tamago sold in chains. Yums.

Finally, red bean and mochi ice cream dessert. Mochi was smooth and ice cream wasn’t too hard or sweet. Just of the right texture and the red bean was well cooked. Sweet enough for me and texture was very mushy which I love.

So, Shinji has a very limited menu. 3 Sushi courses and 1 omakase. We had the hana menu that costs $75++ which is the cheapest one and I thought it was Kanpeki (perfect). With the chef preparing your sushi in front of you meticulously, I’m sure you will not be bored. Really artistic the way he prepares his sushi. And I think fine Japanese dining will always try to bring you through the different seasons in Japan, allowing you to literally experience them through its cuisine. Am so thankful that Shinji decided to open a restaurant here and I am quite sure I will return for the more expensive sushi or maybe the omakase one day. Service here is also kanpeki and the waitresses are all clad in kimono. I just realised that while all the males are chefs, all the females are waitresses. And judging from my tone, this is a place that I would recommend people to go to if you want serious Japanese food. I thought I was in Japan for a moment as all the seafood and fishes were flown fresh from tsukiji which I believe totally. Being the 32nd on Asia’s Best 50 restaurants 2013, you will definitely be a satisfied customer!

9 thoughts on “Shinji by Kanesaka”