Yeah, it’s Friday and I planned to finish the long week off with Osia. Thinking that I could eat like a king in Osia as I have the RWS invites card, I was quite actually quite wrong. As I only had one dining companion, there was a 50% off the total bill. Sounds good, but actually everything here is overpriced. So, in the end we could only order two starters, two mains and two desserts for $133 which would otherwise have costed us $233. Prices presented will be the original price.

The interior of the restuarant. An open concept kitchen which I like! 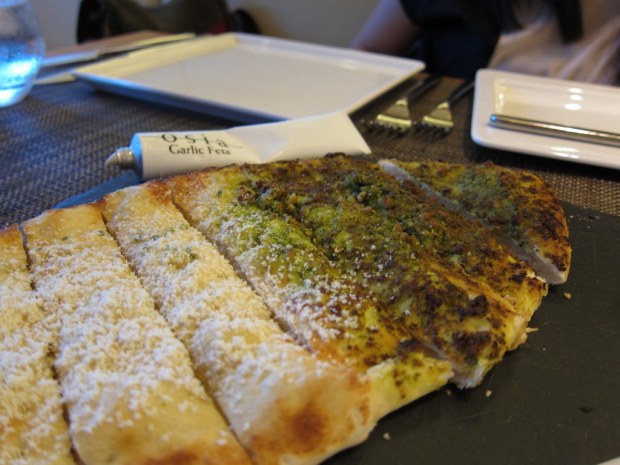 We got the mixed flat bread. Half of it has onion and sour cream toppings while the other has pistachio and pesto. I personally prefer the pistachio and pesto as it tasted slightly more different.Very soft, warm and thin, the bread was yummy. I was joking how onion and sour cream sounded like prinkles to me but the bread actually tasted pretty good. There’s this tube of garlic feta for you to squeeze any amount of it onto your bread and I quite like this cream as it makes the bread garlic fragrant. $11.

The second starter we had was the poached maine lobster. Very delicious lobster indeed. Super fresh and succulent and springy! I loved the lobster meat here. There is also another chunk under the ‘wanton’ skin. The cream wasn’t overpoweringly creamy but light and actually brings out the freshness in the lobster. There are some corn bits on the sides too. $40.

Hokkaido scallop, razor clam and fish with tomato toppings. Everything is just one piece. Feels like a tasting menu but is actually a mains. Everything here is tasty, good razor clam with the springy texture. You know that when your teeth doesn’t sink into eat. The vegetables that went with it were also fragrant. The scallop was just slightly overcooked but otherwise fresh and the fish was cooked well but I couldn’t remember the taste. For such a mains, it costs $70. I couldn’t believe it when I saw the portion, they should have a few more razor clams and scallops! Even people from the other table were complaining about the small portions in the toilet. haha!

The sea perch is actually miso cod I think. Super delicious cod this is. The wiggly tofu at the top are quite cute I thought and makes the fish slightly Japanese. Very fragrant on the outside and when your knife lands on the top, it immediately splits into two. Very good fish. The sauce of the potatoes were also well made too and I enjoyed it. But the vegetables were not palatable I felt. It was too salty and it has a earthy taste. $50 (I think $30 would be a reasonable price).

The uber huge banana souffle. Said to be their signature dish. I went wow when the souffle came and it says for 2 on the menu. I love the crust of the souffle and the whole thing actually as it’s very fluffy and light while it has a strong banana taste in it. There’s some sort of a banana puree in it and the souffle has nuts embedded in it. One of the best souffle that I had. But after halfway through, I felt really full and realised there was a layer of butter oil underneath and I don’t know why. That may explain why it’s so fragrant. Though dismayed, I still pretty much like this souffle. It also comes with vanilla ice cream. $34.

The chocolate soup. It’s like chocolate lava pudding but this was literally choc soup. The crust is really thin while the molten choc is super thick and rich that it can choke someone but really good I thought. The vanilla ice cream has pepper in it and it was quite an interesting combination – I like it. It goes well with the chocolate and makes it less rich! $22.

I think two words can be used to sum up this restaurant – delicious, overpriced, too overpriced actually. The desserts actually came up to $56 on its own. I cannot help but compare these kinda restaurants to my all time favourite Andre that is expensive, delicious but worth the money. Servings over there is bigger and more daring or innovative while still exciting and delicious. Luckily I had my invites card to drop off $100 from the total bill if not I would be quite a disgruntled customer. Standard of service is pretty mixed but there was a waitress which I don’t really like as she only gives me 30s to decide on the things I want. So I just ignore her and her recommendation. As the food is really quite well cooked, I would still recommend the restaurant but only if you have the invites card. Note, this promotion will end by 30th Dec 2013.

Verdict: A good restaurant but overpriced!

One thought on “Osia”