Located in the vicinity of 一樂燒鵝* (that is literally just down the road), 沾仔記 is a wanton noodle specialty restaurant that has been continuously in the bibik gourmand section of the Michelin guide for many years! There are of course many other wanton noodle restaurants with *** all around HK such as Ho Hung Kee or Mak’s noodles, but we specially chose Zhan Zai Ji as it’s the preferred choice among the local friends, especially over Mak’s which is known as a tourist trap as it only serves a meager bowl for about HKD $40.

Well, just to deviate slightly, if you have remembered my post on the inconsistencies in Ho Hung Kee, they indeed lost their only star for a while before regaining it back this year again. 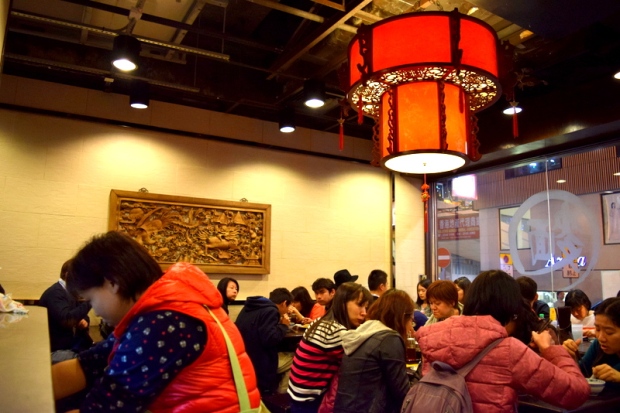 And naturally at such affordable restaurants that got into the Michelin guide, you will expect a perpetual queue every day and night. Packed with so many people in a restaurant like battery hens, we were not spared from space crunch as the 3 of us had to share a small table with 2 others!

And here comes the noodles! It was a straightforward choice for me on the limited menu as I went for the platter wanton noodles that has a super huge meat ball that is as big as Q’s fist, two huge wanton that are bigger than my eyeS and some slices of pork. Very bouncy these balls are as they are jampacked with fresh partially mashed prawn and meat. My favourite was the meat ball that has some citrusy flavour in it as I suspect that Orange peels were inserted in it which helps to lift the overall taste of that ball.

A second photo on this huge wanton that is going to break the spoon.

Having described all the wonders of their wonton and meat balls, I reckon that HK wonton noodles are not my  bowl of noodles as they tend to exude a very strong alkaline taste, if you know what I mean. While soaking in these alkaline solutions make the noodles more springy and addictive, it also gives it a very strong pungent smell that will leave an uncomfortable and dry sensation on your lips and tongue. Perhaps I should get kway teow in future!

2 thoughts on “Zhan Zai Ji 沾仔記 – One of the biggest wanton balls I have seen!”