Going to a Michelin sushi place has somehow turned into a ritual whenever I am in Japan. Not deviating away from the usual practice, after quite a long search due to the massive closure of Michelin restaurants during the Golden Week, Sushi Tokami (One Michelin star) is one of the rarest few that is still open on one of the days. But that comes with a caveat as its original 5000 yen set for a 10 piece sushi course went up by more than 50% to an unforeseen 8000 yen due to the sudden jack in market prices of the fishes charged by the famous Tsukiji Market that are also set to close for the next few days. Well, so we got the 10 piece sushi and lets get a glimpse on what were served!

This perfectly marinated Octopus tasted lightly sweet and tasted really flavourful without an overly chewy texture. Being one of the freshest octopus that I’ve ever had, this appetiser was definitely one of the highlights of the sushi course.

Before getting into the more exciting Sushi, lets take a look at the more common or basic sushi that are served in most Michelin restaurants. Anticlockwise: Tai snapper, Marinated Tuna, Chuttoro, Kohada, Anago and Sweet Ebi. Fresh is a given over here and the melt-in-your-mouth sensation is common as well. The Sweet Ebi though had a different texture with its succulent springy meat.

And I realised that there is a major difference in these seemingly similar Michelin sushi restaurants after having visited quite a few in Japan – The Shari or sushi rice; literally splitting them into two distinct groups. What we might have been more familiar with, the mirin marinated sushi rice that has more sweetness than sourness (usually white in colour), is replaced by the red vinegar shari (brown in colour) by a large number of restaurants (or it could have been the other way round depending on who came first). So it really depends on your preference, whether the sweeter rice or slightly more sour one suits your palates. As for now, this is my list of the two major groups:

And personally, the white shari appeals more to me, which I believe is the same for most Sgreans. So next up for the highlights!

This Ika or squid nigiri was made perfect and soft with the deft knifing skills of the chef. Not like the usual gooey ones that we may have witnessed at the market, the gooeyness over here is kept to the minimum, that made it taste like a natural sebum kissed with a dash of refreshing yuzu.

The Spanish Mackerel felt like an art piece with the beautifully sliced clefts engraved onto it, that made this piece look even more luscious. 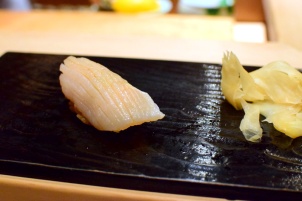 Baby Snapper with some interesting dusting on top of it which I couldn’t recollect what it really is. And this succulent huge razor clam that tasted naturally sweet.

The meal ended adequately with a super fresh roll of maki with freshly chopped tuna within, held together by the crispiest nori that one could have imagined, which is really expected from a Michelin restaurant as none I have visited have faulted on this. What came as dessert, the caramelised egg custard, was slightly unexpected as this usual savoury dish is made sweet over here with a layer of crispy well-torched caramel.

For me, Sushi Tokami did perform despite its hefty price tag during the golden week. While this wouldn’t be worth the tag, a 5000 yen would certainly justify a detour to this restaurant for its 10 course meal. Then again, I am still more inclined towards those that serve white shari!