You really need to get your google map working when you start to venture into really quiet side roads, as if no other restaurants should be located there! Just like most other Kaiseki restaurants that have a little bit more character, Giro Giro Kagurazaka 枝魯枝魯 is located off the beaten track but in a pretty plush neighbourhood near Iidabashi. Hailing from Kyoto, the origin of Kaiseki, Giro Giro (Tokyo branch) does not adhere to the Kaiseki tradition but interjects elements of modern fusion cooking into some of its courses that would actually please your palates. Only one menu is served here, at ¥4500 for dinner. 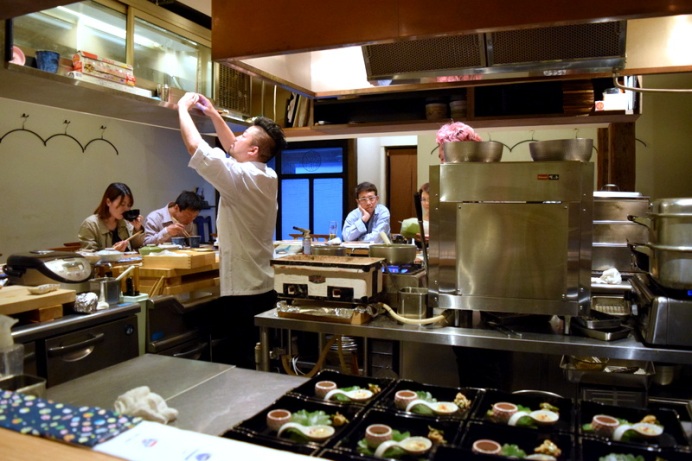 The restaurant starts to fill up as it gets later into the night. 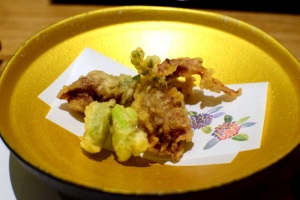 And the moment you are seated at your table, you would have felt the vibes of this restaurant already. Chefs are dressed in pseudo lab coats instead of proper aprons while their hairstyles could perhaps be the most punkish, which deviates from the balding norm. Instead of using a classy table mat that most would have done so, what greets you would be a stern picture of a mythical character who is on his way to capture the evil demons. If you know who 鍾馗 (Zhong Kui) is, this really felt like him.

The first starter to begin this meal – crispy fried octopus with a fresh chewy texture that is paired with slightly salted edamame beans.

An exciting second course that is brimming with flavours and textures – Tai fish spring roll that tasted smooth and slightly mushy within; Sushi bowl with well mirin-ated rice and fresh prawn toppings. My favourites – the beautiful pan-fried fish plated on top of the luscious intense broccoli sauce and ironically, the unassuming side squid dish that was creatively marinated in the lightly sweet strawberry sauce.

The clear soup though was slightly disappointing, with its slightly lacklustre taste while the smoked fish (on the right), though was creatively prepared by first giving it a light grill followed by smoking it in this bowl, did not really appeal to me with its flimsy texture.

This big bowl of chawanmushi was interestingly flavoured with fish and fried fish skin. In addition, the thick layer of green sour plum sauce on top adds an interesting edge to its overall taste. 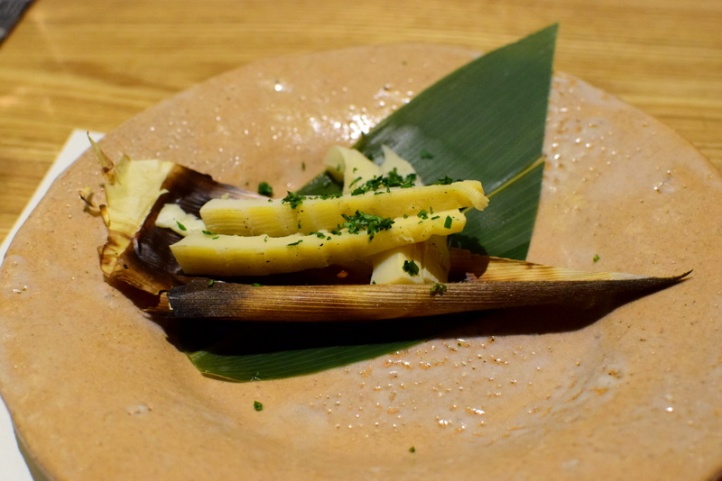 Grilled bamboo before entering the last phase of this meal! 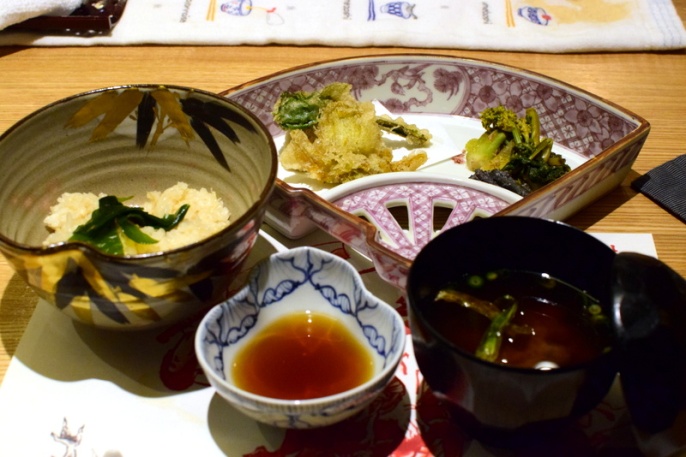 The penultimate course – ginger rice with vegetable tempura which I believe gives you a refreshing and lighter end to your meal.

And their creative dessert platter – Milky Hojicha Ice cream with cheese crackers, azuki red bean and butter cream cake, together with a piece of tomato mousse. The tomato mousse may sound weird but is actually one of the most enjoyed desserts in the platter with its creamy, dense consistency that emanates a light tomato fragrance.

Priced at ¥4500 yen for dinner, expectably, there were indeed some misses among the majority hits which could in general still be considered as an enjoyable and good kaiseki place to go to. Surprisingly, though I thought such a concept may not pander to the more conservative Japanese, we were the only foreigners there that night and it was full house by the time we left.