Who would in the right mind choose to reject the highly coveted Michelin star?! Not any chef in this world I suppose, but such a strange scenario is however not uncommon in the land of Michelin restaurants – Japan. We may get the jitters when we first step into a Michelin Japanese restaurant, with a slightly haughty-looking chef behind the counter who only expects respect from his customers for his lofty culinary skills. I didn’t expect anything less than such a demanding attitude, especially so when I have chosen to visit Rikichi 梨吉 that previously rejected the star. This might sound a little nerve wracking but the curiosity behind the chef’s story beckons!

And upon stepping into the one-man restaurant, who is both the chef and waiter, I felt absolutely relaxed, totally unlike what I have expected. Very casual counter bar restaurant with typically just a few seats, the old chef who has helmed this restaurant for 29 long years, coming to 30, is perhaps the friendliest one that I’ve ever met. Just like a grandfather cooking for his grandson, apart from the fact that I have to pay 8000 yen there after. After being seated comfortably on the wooden chair with a simple cushion over it, down-to-earth appetisers were first served. Showcasing the subtleties of the appetisers, the crunchy hanaguri clam has all it takes to whet the appetite.

Japan has been highly revered of its naturally sweet underground roots without additional flavouring from condiments at all. Perfectly embodied by the two fat moist pieces of satoimo or Kyoto yam, the sweetness has been perfectly locked by the sequential steaming and frying process with much precision.

One of the most favourite dishes that night – Yuzu Nasu dengaku. The miso rendition has always been the one being served at restaurants; yuzu – that must be a first for me and most. Really creamy slab of tangy yuzu puree spread over the comforting tender aubergine, that was a perfect combination as its sourness manages to reconcile beautifully with the savouriness of this dish. 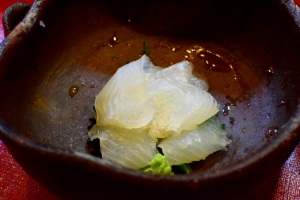 And the next two – Aburame fish clear soup that is being cut through by the lime zest. Don’t be fooled by the crystal clear soup, as the umami flavour gets increasingly stronger towards the end! While the Kare sashimi was as fresh as it could be. 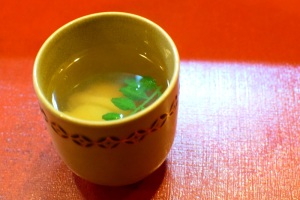 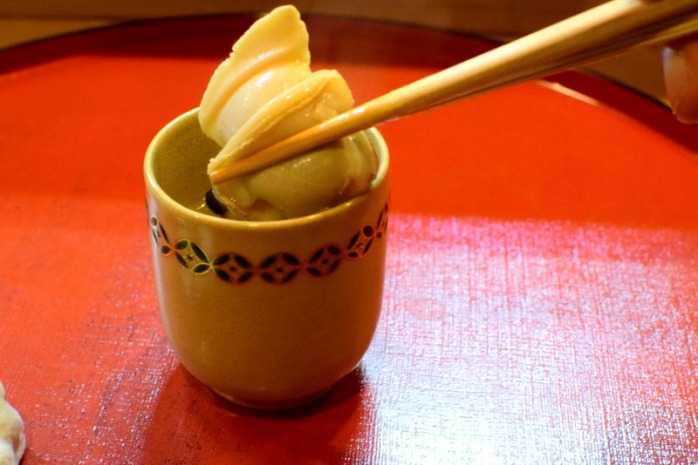 As we proceed into the meal, dinner slowly crescendos as the dishes get more intriguing and fun. Wouldn’t have I imagined that fish entrails could also be plated so enticingly. The most exciting moment – Tamagori soup that came in an unassuming cup which has one of the most luscious clam that I’ve ever tasted. Super sweet and fresh, this was completed with a springy texture. Later did I find out from the chef that this was specially delivered to the restaurant (via a 2h journey) on the same day from a prefecture by the bay. So much emphasis on freshness by the Japanese indeed! 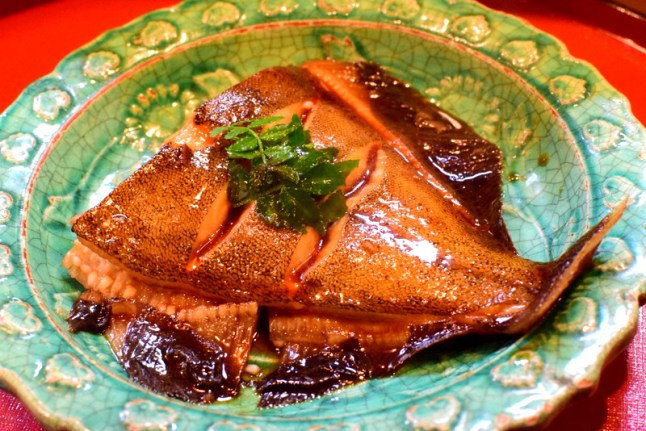 While we had Kare sashimi previously, this lovely Kare over here was steamed in a sweet yet savoury sauce that makes it beam with a delectable coating. Steamed to a perfect texture, the fish was devoured down to its bones! 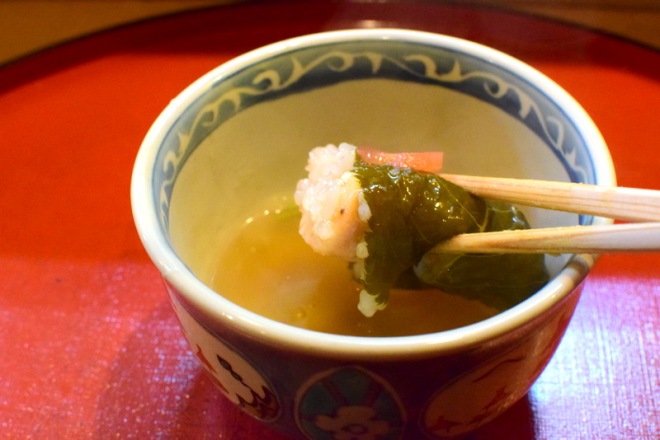 The next comforting dish was the steamed salmon with mochi that renders its overall texture not just one-dimensional. 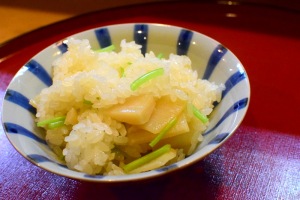 The penultimate dish – expectedly was served with a simple yet comforting bowl of rice with pickles by the side. 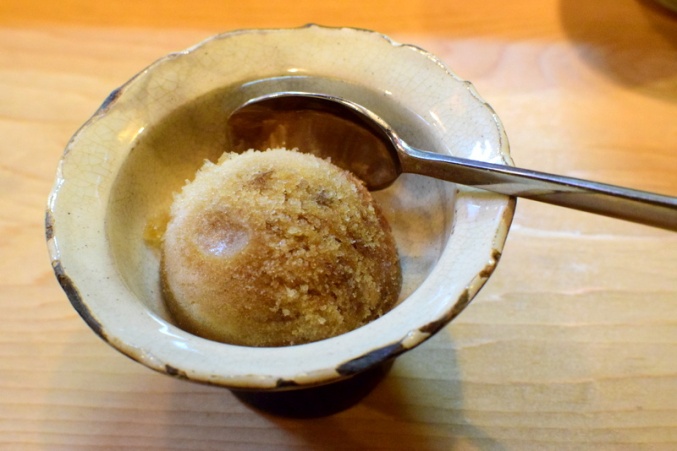 And the entire meal was ended on a sweet and light note with this smooth brown sugar sorbet. Not overly sweet, it does have some refreshing elements in it!

And have I not completed on the story of the rejection of the star. Well, the amicable chef shared that it was as simple as not knowing what the Michelin guide book really stands for then but is glad now to be recruited into one of the most prestigious culinary guide books. A really fun kaiseki meal we had and a selfie with the ojichan chef!