Who would in the right mind choose to reject the highly coveted Michelin star?! Not any chef in this world I suppose, but such a strange scenario is however not uncommon in the land of Michelin restaurants – Japan. We may get the jitters when we first step into a Michelin Japanese restaurant, with a slightly haughty-looking chef behind the counter who only expects respect from his customers for his lofty culinary skills. I didn’t expect anything less than such a demanding attitude, especially so when I have chosen to visit Rikichi 梨吉 that previously rejected the star. This might sound a little nerve wracking but the curiosity behind the chef’s story beckons! 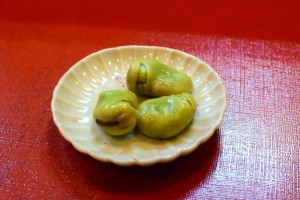 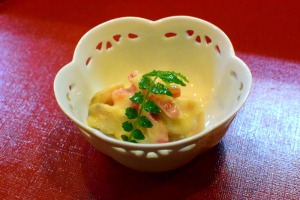 And upon stepping into the one-man restaurant, who is both the chef and waiter, I felt absolutely relaxed, totally unlike what I have expected. Very casual counter bar restaurant with typically just a few seats, the old chef who has helmed this restaurant for 29 long years, coming to 30, is perhaps the friendliest one that I’ve ever met. Just like a grandfather cooking for his grandson, apart from the fact that I have to pay 8000 yen there after. After being seated comfortably on the wooden chair with a simple cushion over it, down-to-earth appetisers were first served. Showcasing the subtleties of the appetisers, the crunchy hanaguri clam has all it takes to whet the appetite.

Japan has been highly revered of its naturally sweet underground roots without additional flavouring from condiments at all. Perfectly embodied by the two fat moist pieces of satoimo or Kyoto yam, the sweetness has been perfectly locked by the sequential steaming and frying process with much precision.

One of the most favourite dishes that night – Yuzu Nasu dengaku. The miso rendition has always been the one being served at restaurants; yuzu – that must be a first for me and most. Really creamy slab of tangy yuzu puree spread over the comforting tender aubergine, that was a perfect combination as its sourness manages to reconcile beautifully with the savouriness of this dish.  END_OF_DOCUMENT_TOKEN_TO_BE_REPLACED

You really need to get your google map working when you start to venture into really quiet side roads, as if no other restaurants should be located there! Just like most other Kaiseki restaurants that have a little bit more character, Giro Giro Kagurazaka 枝魯枝魯 is located off the beaten track but in a pretty plush neighbourhood near Iidabashi. Hailing from Kyoto, the origin of Kaiseki, Giro Giro (Tokyo branch) does not adhere to the Kaiseki tradition but interjects elements of modern fusion cooking into some of its courses that would actually please your palates. Only one menu is served here, at ¥4500 for dinner.

The restaurant starts to fill up as it gets later into the night.

And the moment you are seated at your table, you would have felt the vibes of this restaurant already. Chefs are dressed in pseudo lab coats instead of proper aprons while their hairstyles could perhaps be the most punkish, which deviates from the balding norm. Instead of using a classy table mat that most would have done so, what greets you would be a stern picture of a mythical character who is on his way to capture the evil demons. If you know who 鍾馗 (Zhong Kui) is, this really felt like him.

The first starter to begin this meal – crispy fried octopus with a fresh chewy texture that is paired with slightly salted edamame beans.   END_OF_DOCUMENT_TOKEN_TO_BE_REPLACED 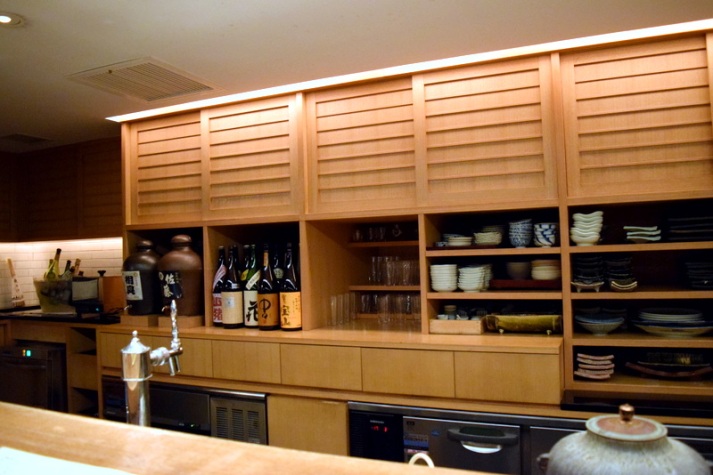 Lined along the classy streets outside Omotesando station, we could easily spot huge brands and sleek restaurants, and though Rakushokushu Maru 楽食酒 圓 is just a hole in a wall, this hole opens up to a 2 storey-deep restaurant, with a stylish counter bar and some private rooms. Having a pretty huge ala carte menu, going for the Kaiseki made things easier as we did not need to rack our brains over the less familiar items. We got to choose from 3 menus, a 4800, 5500 and 7000 yen menu and being a kaiseki fan, I went straight for the 7000.

The first appetiser, salad of amanatsu orange and gluten bread served with white tofu cream, has assured us already that it will be a up-to-standard kaiseki meal. With an addictive chewy texture, the greenish gluten bread actually felt like a hybrid of konyaku and Mochi; definitely very refreshing when eaten together with the tofu cream.

The assorted sashimi was plated beautifully and there really isn’t a need to describe about its freshness.

Clear soup with stewed fish and bamboo shoots with a light sweetness attached to it. END_OF_DOCUMENT_TOKEN_TO_BE_REPLACED